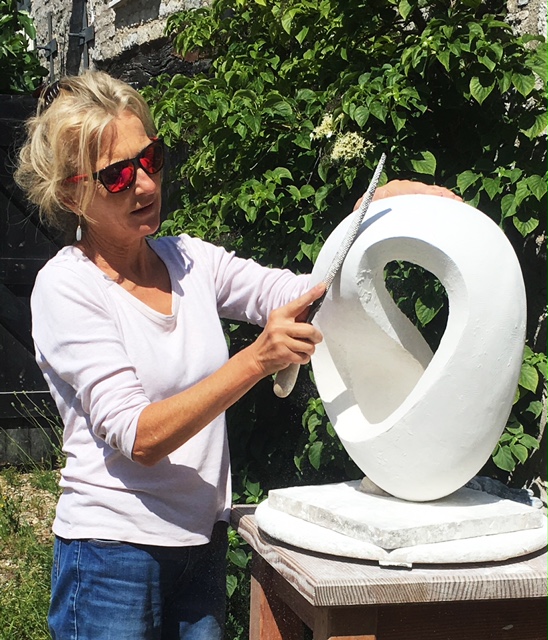 Felicia has immersed herself in the world of art since an early age, developing skills in graphic and figurative art. Her passion for sculpture arose from her career in art restoration, where she worked with the many mediums and processes relating to three dimensional form. This gave her the versatility to work in a variety of materials. She now works in wire and plaster, before casting or fabricating in bronze, steel or *scagliola, choosing materials in harmony with the concept of the piece.

Along with her career as a artist, she has a parallel interest in the study of consciousness. Many of her concepts come from the dilemma of what it is to be human, and how we ascribe meaning to our lives. Exploring the mechanics of the mind, her work seeks to balance the weight of identity with the ‘ineffable lightness of being’. It is, as she sees it, an attempt to give form to the formless.

Inspired by universal themes such as time, space and connectivity, she aims to capture the spirit of these ancient concepts in contemporary form.

Felicia’s intention is to combine the organic, ordered and spiritual in the same tangible composition. Her sculpture, thereby, symbolises the interplay of mind and matter and our relationship with the source of life itself.

* Scagliola is made from ground alabaster, mixed with earth pigments to resemble marble or granite. Invented in the early 17th century by monks in northern Italy it was used to make pictorial, inlaid table tops, and later adorned the walls of churches across Europe. The Second World War, almost brought about the extinction of scagliola worldwide. Since 1970, it has been revived, initially to conserve old works, but subsequently new ways to use this material have opened up. The results are rare and valuable pieces of art, based on a tradition rooted in history.